[Forgive my dearth of  Water for the Ages posts. I have been studying water and sanitation issues in a sociology program at University of California Santa Cruz. I am a teaching assistant and taking courses there. Our current student worker contract expired November 2013. One of our demands – besides calling for a living-wage, etc. – is all-gender restrooms. Below is my public letter in support of that demand. If you also support this demand, please visit this online petition.]

This letter is in support of the all-gender restroom demand by the UC Student-Worker Union. At least one all-gender and wheelchair accessible restroom should be installed in each UC campus building. This is a human right. This is a worker’s right.

I am second-year graduate student enrolled in the sociology program at UC Santa Cruz. I am also a Teaching Assistant for a sociology course here. I started focusing on global water and sanitation issues around five years ago in both work and research, and safe access to toilets and hygiene is a demand people around the world take seriously. Given the recent recognition of water and sanitation as a human right by the UN and also by the state of California, to say nothing of the obvious benefit to various users, this is a demand the University of California should take also seriously.

Did you know that California was the first state in the nation to designate water (for “sanitary purposes“) a human right? Governor Brown signed the historic bill in September 2012. He made this move after the ground-breaking UN resolution for an international human right to water and sanitation in July 2010. In fact, this year the UN is officially dedicating November 19th as World Toilet Day? They said “This new annual observance will go a long way toward raising awareness about the need for all human beings to have access to sanitation.”

Sanitation is a question of basic dignity for people in the Global South and in the Global North. And we (UC students, faculty, staff, and visitors) are not exempt. The average adult urinates up to eight times a day and defecates up to three times a day. Still not all people in the UC system have equal access to restrooms. Families with small children, those with disabilities, caretakers of the elderly, and LGBTQ individuals often walk by restrooms thinking “is it safe to enter?”

LGBTQ individuals are especially burdened with possible harassment and bullying in gender-segregated restrooms. A 2001 San Francisco Human Rights Commission survey found “41% of transgender respondents reported direct harassment or physical violence in gender-limited public bathrooms.” The Transgender Law Center states “many transgender and non-transgender people have no safe places to go to the bathroom – get harassed, beaten, and arrested in both women’s and men’s rooms.”

Workers on campus are doubly impacted. With limited time constraints, they might not be able to leave their building to find an all-gender restroom before their section starts or during class breaks.

In summary, the UC system is especially well-poised to ensure these critical sanitation rights are met for all workers (and all people) on campuses statewide per Governor Brown’s recent legislation requiring water for “sanitary purposes” for all people and the international recognition of sanitation as a human right. Workers with small children, those with disabilities, caretakers of the elderly, and LGBTQ individuals deserve a working environment that meets their sanitation needs. A minimum of one all-gender and wheelchair accessible restroom in each UC campus building is a both a human right and a worker’s right. I ask that you honor these rights during UAW 2865 bargaining agreements.

The second event I tuned to was the Concrete Actions: Advancing the Integration of Gender, Water, Food Security talk. The theme of this seminar was exciting because I had previously grappled with developing a tool for measuring gender equality and empowerment in water and sanitation. And as Hon. Bigombe so eloquently said, “If you want to go fast, travel alone. If you want to go far, travel together.” This talk focused on gender, water, and food security with a feature on the African Ministers Council on Water (AMCOW) Gender Strategy. The AMCOW Gender Strategy is a model that could be adapted by other regions because it addresses gender equality in “water-livelihood spheres” while identifying minimum targets for gender, water, and food security. The aim of the talk was to have multiple experts review methods of gender, water, and food security measurement to find common measurement tools. As I have experienced, measurement of gender equality and empowerment for water can difficult because gender and water cover multiple scales (household, community, political) and multiple dimensions of interaction (access, planning, and management). So I was excited to learn from these women. 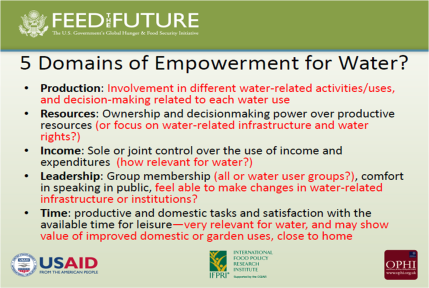 Above Photo: Domains of Empowerment for Water by Dr. Ruth Meinzen-Dick, IFPRI

The esteemed speakers presented ways for understanding and measuring gender equality and empowerment. Dr. Dikito-Wachtmeister from GWP said the AMCOW gender mainstreaming process gathered comments from stakeholders and developed key targets. Their approach honors qualitative data and participatory action. Dr. Sisto from FAO outlined four national gender-sensitive indicators: 1) management of land/water, 2) access to paid employment, 3) access to education, and 4) institutional empowerment. FAO also developed a checklist for organizations to use while mainstreaming gender in agriculture. Dr. van Koppen from IMWI identified gender-sensitive indicators for different water realms including livelihoods, uses, control over technologies, and control over resources. Her talk is featured on YouTube here. Dr. Meinzen-Dick from IFPRI reviewed a WEAI tool to measure empowerment in agriculture within five domains: 1) productive decisions, 2) control over resources, 3) control over income, 4) leadership opportunities, and 5) adequate time. She made comparisons of these domains to the water sector (see above image). Overall, I’m excited to scour the presentations again to improve my understanding of gender equality and empowerment measurement in water and sanitation. Scalable is important – yes, but socioeconomic conditions have to inform any model. I’m curious to see if “a one size fits all” approach is practical.

Stunning and breathtaking visual imagery of women from around the world using water for drinking, cleaning, cooking, growing, working, praying, and living. This striking video was produced by the International Water Management Institute (IWMI) for International Women’s Day on March 8th. The video is posted on their new Gender Topics page.

Just finished an interesting article examining roles and limitations of technology for solving problems in water access, planning, and management for women around the world.

“In poor communities, technologies are often touted as panaceas for poverty. For women in productive and reproductive roles, technologies, such as those for fetching and storing water, can make daily tasks easier. But do such technologies actually ensure women’s rights?” 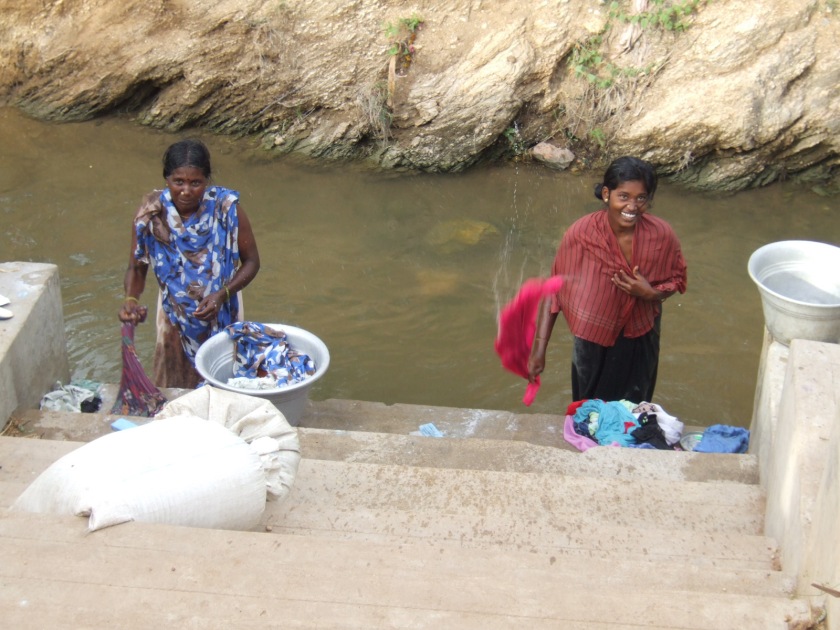 Above Photo: Two women washing clothes in a canal in Tamil Nadu.