Today – 19 November 2013 – is World Toilet Day. World Toilet Day is being officially recognized by the United Nations this year, and a host of organizations are simultaneously working on sanitation efforts worldwide.

Why is World Toilet Day important? Many people both in the United States and around the world have no safe places “to go.” Sanitation saves lives on a daily basis and in disaster situations, and those most oppressed encounter largest challenges around access. Statistics are stark. 2.5 billion people have no adequate sanitation. Preventable sanitation-related illnesses kill 1.5 million children each year. Around 1.7 million people in the US do not have indoor plumbing. Another 1.5 million people in the US live outside. This is a problem that affects many people in many places.

What is the history of World Toilet Day? The amazing Jack Sim, aka Mr. Toilet, started the World Toilet Organization 19 November 2001. He used the acronym WTO (think World Trade Organization) to raise awareness about the lack of sanitation globally. World Toilet Day was inaugurated the year after the anniversary of WTO founding. Starting in 2013, the UN designated 19 November World Toilet Day. Jack Sim is traveling to NYC for a myriad of celebratory events.

What can you do? What can you learn? Many admirable organizations are involved in sanitation. PHLUSH compiled a massive list of information and advocacy tools from many of them here. There are UNICEF posters and a Toilet Trek game, an interactive website by WASH United, and much more. Two US grassroots organizations – west-coast PHLUSH and east-coast The POOP Project – are also trying to raise awareness about US toilet issues. See ToiletsUSA : Why We Need to Speak Out on the PHLUSH website. Take The Pooper Pledge on The POOP Project website. Finally, if you are so inclined, you can follow #ToiletsUSA, #WorldToiletDay, #CelebrateTheToilet, #LiftTheLid, or #wecantwait on Twitter. May every day be World Toilet Day.

“A nation is judged by the compassion it shows its weakest citizens.” – Bruce Springsteen

Water and toilets are inextricably linked, but toilets sometimes take a backseat to water problems occurring worldwide. But if you don’t have water, you can’t have some styles of toilets or proper hygiene and around 200 million tons of human defecation pollutes waterways each year causing illnesses. Even though over 800 million people do not have safe drinking water and around 2.6 billion people do not have safe sanitation, water projects often receive more funding and media coverage. It’s essential to think about toilets locally and globally. World Toilet Day created by the World Toilet Organization is an opportunity to talk about the hidden problem of sanitation. To celebrate World Toilet Day 2012, Water for the Ages is raising awareness in US cities about emergency sanitation with PHLUSH and sharing information about toilet initiatives happening globally. Sanitation saves lives!

Sharing Emergency Sanitation in the US
PHLUSH believes toilets are a human right. The organization [where I volunteer] works on sanitation issues in North America: 1) public restroom design, 2) emergency sanitation, and 3) ecological sanitation. PHLUSH has had success in adaptation of an emergency toilet model used in Christchurch, New Zealand. This Twin Bucket Emergency Toilet helps families deal with lack of sanitation, and it’s ecologically friendly. Partner organization MDML created the Sewer Catastrophe Companion which provides detailed instructions in the event of long-term sewer disruption. These two organizations seem to be leading the nation in long-term emergency sanitation solutions. For World Toilet Day 2012, PHLUSH is sharing this emergency toilet model with several cities across the country. Please see open letters to Seattle, San Francisco, and Santa Cruz below. For more information, please contact info@phlush.org and follow @PortlandPHLUSH and @waterfortheages. 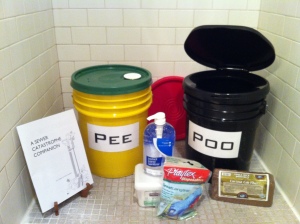 Supporting Sanitation Efforts Worldwide
Lack of toilets globally is a huge issue, and related illnesses are the second biggest killer of children under five. Regions with worst access are West and Central Africa (36 percent coverage), South Asia (37 percent coverage) and Eastern and Southern Africa (38 percent coverage). Improving toilet coverage will allow girls to attend school, help save lives of small children, create a safer environment for women, and is the first step towards empowering communities. Many organizations are working to raise awareness on World Toilet Day 2012. The World Toilet Day website encourages people to get involved by tweeting and signing a petition. Water Aid created an awesome video to let people know 1 in 3 women do not have safe places to go. A great article called Thinking Outside the Stall was written featuring WASH Advocates. Water.org has an interactive website where you can “share your voice for World Toilet Day” by allowing them to link to your twitter and Facebook accounts. And Water for People has nifty e-cards that you can send to your friends. Please take a few moments today to learn a little something about those many humans without toilets. It could help save lives!

How would you like to use the bathroom on the side of the road in the middle of a bustling town?  How would you like to eat dinner soon afterward with no clean water to wash your hands? Today is a day to pay attention to the over 2.5 million people in the world that do not have access to adequate sanitation. It’s World Toilet Day.

Over 4,000 small children die every day from diarrheal diseases related to poor sanitation. Organizations like Water Aid, Water Advocates, and the World Toilet Organization are working to help those families build, develop, and learn about sanitation alternatives. Water Aid says they need your help.